Left-Communism refers to a broad scope of economic and political philosophies that emphasize the anti-authoritarian aspects of Marxism. Early currents of libertarian Marxism, known as left communism, emerged in opposition to Marxist-Leninist vanguardism, it is also often critical of reformist positions, such as those held by social democrats. Libertarian Marxist currents emphasize the Marxist belief in the ability of the working class to forge its own destiny without the need for a revolutionary party or state to mediate or aid its liberation. 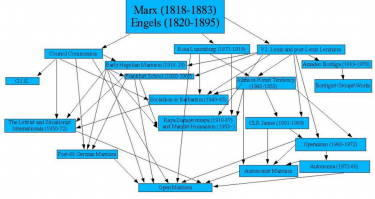 Autonomism emphasises the ability of the working class to force changes to the organization of the capitalist system independent of the state, trade unions or political parties. Autonomous social movements involve people directly in decisions affecting their everyday lives. They seek to expand democracy and to help individuals break free of political structures and behavior patterns imposed from the outside.

Bordigism is a variant of left communism which refuses on principle any participation in parliamentary elections.

The Chaulieu–Montal tendency is the political philosophy of the French libertarian socialist group 'Socialism or Barbarism' and its British counterpart 'Solidarity', following from the belief that what the working class was addressing in their daily struggles was the real content of socialism. It was critical of Leninism, rejecting the idea of a revolutionary party, and placing an emphasis on the importance of workers' councils.

Communization means the abolition of property itself along with any state-like institutions claiming to represent a given subset of humanity. In these accounts humanity as a whole, directly or indirectly, would take over the task of the production of goods for use (and not for exchange). People would then have free access to those goods rather than exchanging labor for money, and distribution would take place according to the maxim “from each according to his ability, to each according to his need.”

Council communism is a current of socialist thought characterized by its opposition to statism and its advocacy of workers' councils and soviet democracy as the basis for dismantling the class state. It is opposed to the party vanguardism and democratic centralism of Leninist ideologies and it contends that democratic workers' councils arising in the factories and municipalities are the natural form of working class organization and authority. Council Communism also stands in contrast to social democracy through its formal rejection of both reformism and “parliamentarism”.

De Leonism is a libertarian Marxist current combining the theories of revolutionary syndicalism with orthodox Marxism. According to De Leonist theory, militant industrial unions as the vehicle of class struggle will bring about the change needed to establish a socialist system. Unlike Anarcho-Syndicalism, De Leonism believes in the necessity of a central government to coordinate production as well as in the use of a revolutionary political party in addition to union action to achieve its goals. 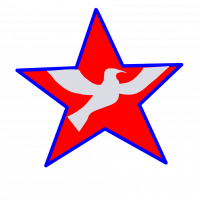 Marxist humanism concluded that, as there was no true socialist society existing anywhere in the world, a return to the fundamentals of Marxism was in order - emphasizing the Marxist Theory of Alienation and Hegel's philosophy as being the foundation of Marxism.

Open Marxism is a school of thought which draws on libertarian socialist critiques of party communism and stresses the need for openness to praxis and history through a dialectical method grounded in the “practical reflexivity” of Karl Marx's own concepts. The “openness” in open Marxism also refers to a non-deterministic view of history in which the unpredictability of class struggle is foregrounded.

Situationist theory represents an attempt to synthesize this diverse field of theoretical disciplines into a modern and comprehensive critique of advanced capitalism. The situationists recognized that capitalism had changed since Marx's formative writings, but maintained that his analysis of the capitalist mode of production remained fundamentally correct; such as his theory of alienation. They asserted that the misery of social alienation and commodity fetishism were no longer limited to the fundamental components of capitalist society, but had now in advanced capitalism spread themselves to every aspect of life and culture.

Western-Marxism emphasises Marxism's philosophical and sociological aspects, and its origins in the philosophy of Georg Wilhelm Friedrich Hegel and the more humanistic works of “Young Marx”. Western Marxism arose in opposition to the form of Marxism codified in the Soviet Union, and over time shifted from a political movement to an academic one.